New Roof for the Goats and Ducks 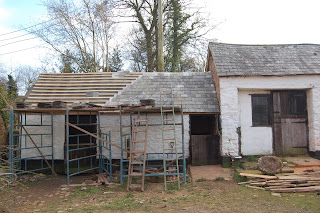 Last summer the back section of the roof on the dog kennel and goat and duck house had its slates replaced and we have now finally started on the front half. Several slates had slipped down after the snow and rain was starting to pour in. New felt and battons have been put on the roof and most of the old slates are being put back and hopefully it will be complete before it starts raining.
At the back of the building which used to be an old pig sty there is a small door which we are going to open up door so that the goats can go out and then cross over the stream. We are going to put a railway sleeper over the stream so the goats can cross over into a small paddock.
Posted by Maggie at 1:37 PM No comments:

A Snowy Start to the Year 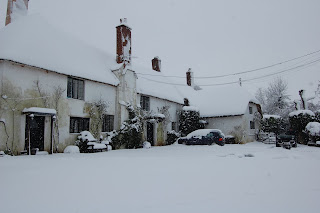 We have had a quiet January with Russell still building the wall and it is beginning to look quite impressive. However, because of the heavy frosts in January he has had some problems with the pointing reacting to the frosts and this has caused some damage which may mean he has to point sections of the wall all over again. The planning permission for the three bay garage which is to be sited behind the dog kennel was given at the beginning of January and so far the footing has been put it in, but again the frosts have stopped the brickwork being completed. The timber frame for the garage is due to arrive at the end of February so I hope Spring comes soon and this wintery weather goes away. 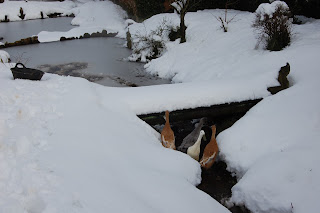 While the whole of the country was being engulfed with snow I thought we were going to get away with it, but overnight on 6th February we had about six inches of snow fall starting at midnight. We awoke to deep snow on the Friday morning. The ducks were not impressed with their pond having a deep layer of snow lying on top of it, so they stayed at the shallow end where the stream trickles through the wall from the courtyard to Derek's garden. The goats decided to stay in for the day but the horses wanted to go out. Moo decided to roll and roll and thoroughly enjoyed the snow. Enzo's little legs were lost in the snow and he struggled to walk as it was nearly up to his belly. Surprisingly Mim who has never seen snow wasn't interested. 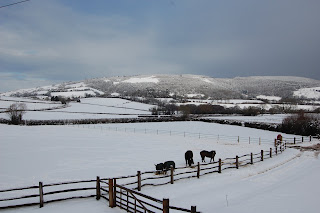 Rob decided the best mode of transport to the village shop was the Kawasaki Mule. Although the drive was a cold as it has no roof or windscreen and he said the snow hitting you on the face as you drove along hurt and he should have worn his ski goggles. Derek cleared the snow around the stables and the barn with his JCB so we didn't have to struggle through the snow.
Posted by Maggie at 8:43 AM No comments: