I just had to take a photograph of this amazing Kniphofia in the garden at the back of the house. It is the best it has ever been since being planted and I think it has just loved the very hot summer. 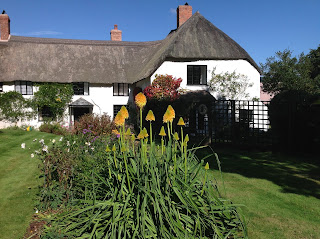 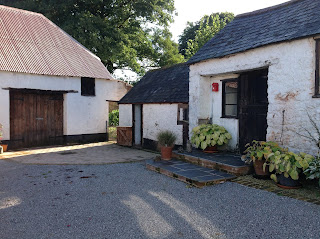 Back in January we started the project of improving the area around the dog kennel, the medieval barn and laying clippings on the whole of the drive. It has all settled in very well and we are really pleased with the new steps into the dog kennel. I placed all my pots with the Hostas outside to make the building a bit more interesting. This summer the Hostas have drunk gallons of water and unfortunately have suffered a bit with burnt leaves because of the hot sun.

New Porch for the Cottage 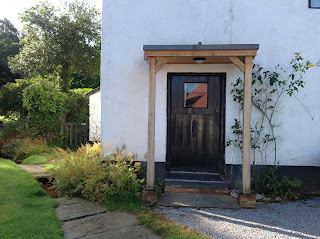 This year because of the amazing weather we have had, we decided to concentrate on outdoor jobs. Our first job was to update the porch to the holiday cottage. We have two more porches that need to be completely rebuilt, but we have had to apply for listed building consent and we finally put in for the permission this autumn and it has now been granted, so hopefully spring 2019 will see two new porches, (back and front) on the main house.
Posted by Maggie at 11:01 AM No comments:

We all knew it was going to hit us, our 'Beast from the East', but I think the strong winds which caused massive snowdrifts were the biggest problem. The last big snowfall at Burrow was also in February, back in 2009. Spades out to dig pathways to the barn and horses in the stables, but the biggest problem was frozen taps which meant carrying loads of buckets of water, so tiring. Here we are on 12 March and there are still drifts of snow in areas around Exmoor, what strange weather. 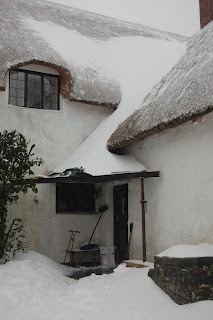 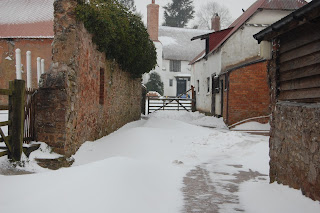 Posted by Maggie at 7:59 AM No comments:

We seem to have started the year with reasonable weather for January, which allowed us to start the project of improving the courtyard and drive. It has become so full of weeds and in areas very muddy that we decided something radical needed to take place. We started outside of one of the doors of the medieval barn by laying a brick area outside the duck house, as this was particularly muddy and then more bricks were laid outside of the second door and around the edge of the barn. We will be laying stone around the edge of the bricks and into the courtyard and then we will be having some tarmac laid in front of the gate onto the road as this area has broken up. 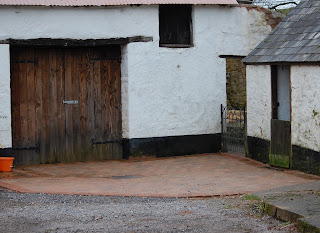 Posted by Maggie at 7:48 AM No comments: