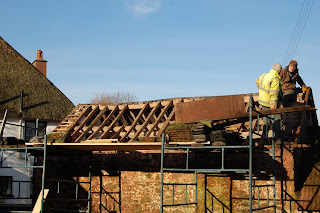 We have started reburbishing the old kennels which will be our 'Animal Annex' to go with the holiday cottage. Derek and Rob are renewing the slates on the back of the roof and then we will start on altering the inside.
There will be a wash down tiled area for dogs that are muddy when they come back from their walks and lots of towels for a rub down. There will also be a big 'Tuffie' dog bed for them to lie on while they dry. We will be having some guinea pig/rabbit and hamster cages, so guests can also bring these pets on holiday.
Posted by Maggie at 2:24 AM 1 comment: 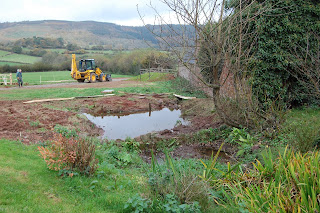 Derek has now started work on creating a pond. The stream runs through the courtyard in Burrow Farm and then through a wall and along the bottom of Derek's garden. It has been overgrown with marsh marigolds and iris as well as a lot of silt on the bottom. Derek has created a small dam at one end so that he can catch the water from the stream.
Alongside the pond he intends to create a vegetable patch after he has levelled out the ground. In the background you can see Derek and Rob working on the new post and rail fence.
Posted by Maggie at 10:13 AM No comments: 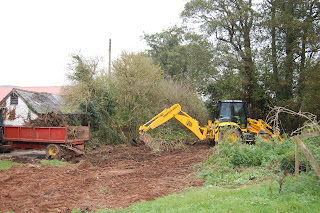 Derek has started clearing the huge compost heap behind the old kennels with his JCB and removing elder trees and general rubbish to open up a big area which goes down to the stream. About 20 old tyres have been dug up and these are going to be difficult to get rid of as no one wants them and its hard to find a refuse tip that will take them. The compost is being loaded into a trailer and taken by tractor to one of the fields where we will be restoring an old exmoor bank. The bank has fallen into disrepair and has an overgrown hedge on top with a few dead trees. We will be planting the two copper beech tree saplings from Ranmore Common onto the bank with the new hedge. The saplings have been sent to us from friends, Helen and Frederick who live on Ranmore Common.
Posted by Maggie at 10:39 AM No comments: 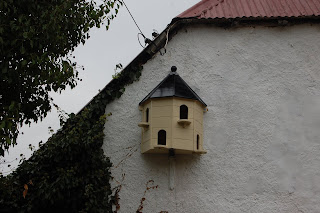 The new dovecote has arrived from Lincolnshire Dovecotes. We just hope that the two remaining white doves will set up home, originally there were five but three have been killed by birds of prey. Their original dovecote was taken by the previous owners when they moved, so the doves have been roosting on the roof of the stables. I have been feeding them wild bird seed every morning to keep them at Burrow Farm. 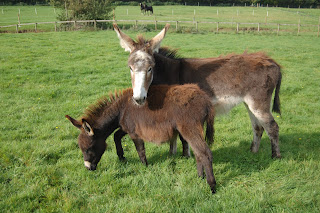 This weekend Amy and Enzo arrived from Farnham, Surrey after being weaned from their mothers.
Both of the donkeys have settled in well and the sheep find them very interesting.
However the horses think they are 'aliens' and have been snorting and galloping up and down the field whenever they see the donkeys, so it may take a few days before they settle down.
Posted by Maggie at 2:06 PM 1 comment:

Our own 'Tarr' Steps 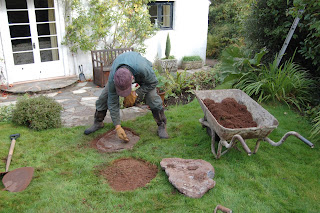 We decided that as the lawn in the garden of the holiday cottage was getting rather worn we would put in some stepping stones. We found the stones on the farm when Derek was digging the new road so Rob spent today laying the stones. We hope to find some more and then lay another path which will link to the bridge which is going to be built over the small steam into the orchard. Bridge yet to be built and orchard looks like a field at the moment, but we have been given two pear trees from our neighbours back in Surrey, Helen and Frederick Polhill.
(Tarr Steps - Prehistoric bridge over the river Barle near Winsford. Dating from 1000 BC, some of the stones weigh 5 tons and were said to have been placed there by the Devil to win a bet.)
Posted by Maggie at 2:56 PM No comments:

The roof and the start of the road

After two days of terrible wet weather at the beginning of October the roof decided to leak! This was not a new leak and had obviously happened before, but the previous owners did not tell us. The first I knew about it was when water started dripping through a bedroom ceiling. Terry Griffiths a Master Thatcher from Bishops Lydeard near Taunton quickly came to our rescue and patched up the offending hole around the chimney. We decided to have both sides of the chimney rethatched.

The weather this week has been glorious and now that the JCB has arrived Derek has been able to start on the new road across the field so we will be able to gain access to the future new barn which will be going up at the end of November.
We have so far had 5 loads of scalpings with more to come next week. A new pipe has been laid to divert the stream and then this has been covered with more road scalpings and earth so vehicles can drive over and through the gateway. The area for the future horsewalker (subject to planning consent) has been scrapped over and flattened, more scalpings to be added.
Posted by Maggie at 12:10 PM No comments:

Our first guests came and stayed in the holiday cottage over the August Bank Holiday, Chris, Kelly, Joseph, Samual and Leah. A really lovely family from Rotherham, Yorkshire.
Joseph and his cousin decided that the French Ouessant sheep needed names so they christened the three boys, Peter, Ben and Eric. The Ouessant sheep decided they didn't want to live on their own anymore so jumped in the field with the Castlemilks and after being chased around which they thought was great fun it was decided to leave them together.

Posted by Maggie at 1:50 PM No comments: