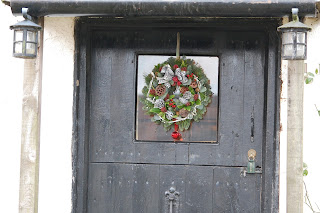 We do not usually have guests staying in the holiday cottage during Christmas, as we are often in the middle of some building work which would not be very good for guests. This year we are busy working inside the main house so we have some guests staying and we thought we would put up a Christmas wreath on the door to welcome them when they arrived. This wreath was made by a friend and it came all the way from Wales!
Posted by Maggie at 7:20 AM No comments:

I have just collected three young goats from Huckford Golden Guernsey Goats in Bristol. They are called Geoffrey and Ginny who are brother and sister and Copper. Ginny had an accident when she was quite young and broke a back leg which meant she had to have a plaster cast, but now she is fine and skipping about. Copper is a pure bred Golden Guernsey and Geoffrey and Ginny are 3/4 Golden Guernsey and 1/4 Boer. Geoffrey has the white on his body and Ginny is the one standing up. I am keeping them separate from my other goats at the moment until they have settled in. 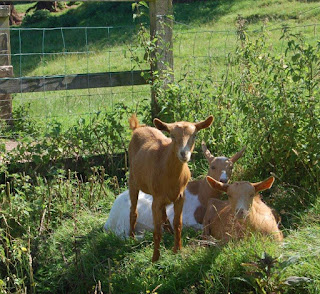 Posted by Maggie at 1:08 PM No comments:

The Repointing still goes on

Well I can't believe that I am now into my third year of pointing walls.I still haven't completed pointing the wall along the stream, but I decided one wall in the corner of the outdoor school desperately needed pointing as quite a few of the stones had fallen out. I have nearly completed this small section, just the top few rows left and then I will return to the stream wall, which is in serious need of repair before it collapses. 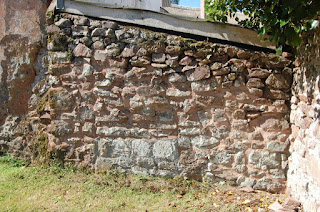 This June one of our guests noticed that there was a nest on the old drainpipe, which is behind the patio doors. He identified it as a Spotted Flycatcher. I would never have noticed if I hadn't been shown the nest. 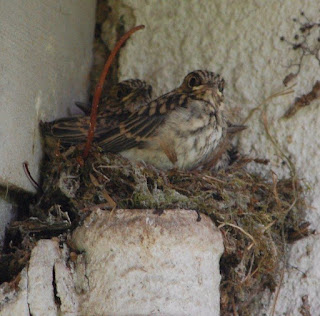 Our lovely Thatchers finished the roof one week early and so did Andy our builder with re-building the main chimney stack. This gave us plenty of time to clear up the yard, wash the walls of the house and clean the windows. The cottage is now ready for our first guests of the year. 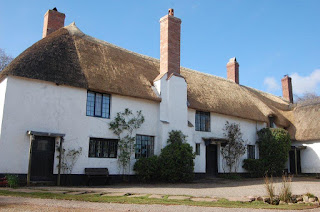 Posted by Maggie at 5:05 AM No comments:

It doesn't look much, but we have had a window made for the cottage by a bespoke carpenter from Wiveliscombe http://www.blakebespokefurniture.com/. It had to be made to plan as it is such a large window and needed to match the house as well as be in wood the same as the window it replaced. Some of the other house windows are metal. Painting is due to start shortly and then the scaffolding can come down and the cottage bedroom tidied ready for our spring guests. 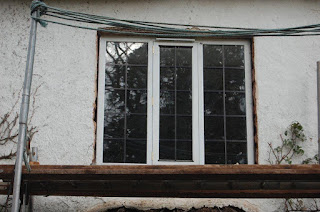 Posted by Maggie at 1:59 PM No comments:

This February and March we are having part of the house re-thatched. Terry Griffiths our thatcher and his team from Bishops Lydeard have been with us the last three weeks and with good weather forecast, hopefully they will be finished long before the end of March. Our local builder Andy Hearn is also working alongside the thatchers re-building the main chimney stack, as the old bricks were crumbling and letting in water. 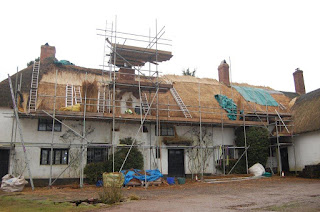 Posted by Maggie at 1:52 PM No comments:

Our area of Exmoor is having a mild winter, with only a very few days of frost and most days quite warm. This means that plants are growing, including the grass! I have noticed quite a few daffodils in the village growing in peoples gardens. The photograph shows a large patch of an early flowering species of Snowdrop growing in my garden called Galanthus Limetree. I bought one bulb about thirty years ago at the spring Royal Horticultural Show in London and now it has multiplied. 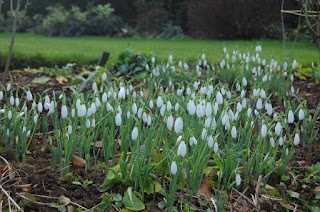