The Wall starts to go up 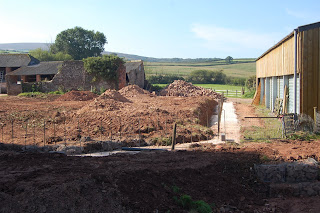 At the end of September we started on building the new wall. The centre of the wall is being built out of blocks and each side of the wall will be faced with the stone from the old wall. The concrete footings was laid thankfully in good weather and then allowed to go off before Russell could start laying all the blocks. This has only been laid to a height which he can comfortably work to until one circuit has be completed. Russell will then need to bring in a tower block so that he can reach the top of the wall.

We are now half way through November and he has almost completed the first part of the stone walling which is inside the future outdoor school. Half of the drainage in the outdoor school has been laid, but this cannot be completed until Russell has finished working on the inside of the wall which will probably be after Christmas. 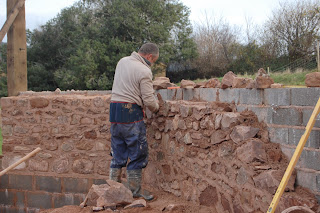 We are planning to have a door installed in the corner of the school with steps on the outside which will take you down to the stream. The photo shows Russell working on part of the wall beside the opening for the future door which shows the upright to the left of the photo. 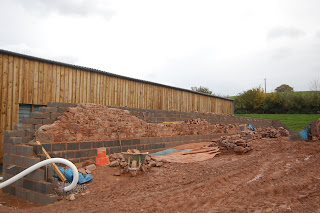