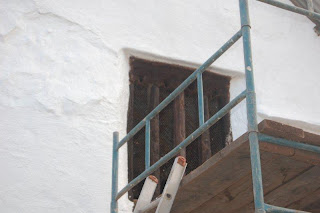 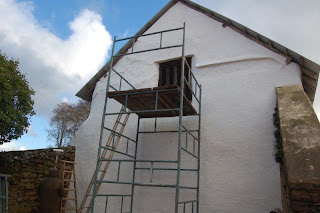 We have been working on restoring the medieval barn this autumn. At the east end of the barn a stone wall was repaired and all the ivy which was creeping over the wall and roof was taken down. Now we have started repairing the west end of the barn. The window that you can see has the original fifteenth century ornate wood work at the very top. The vertical slats have been replaced at sometime, but are still old and in very good condition. Once the paint is dry we intend to build a new shed half way up the barn wall spanning the two outer stone walls. One half of the area will be a log store and the other half is for all the recycling boxes that have been provided by West Somerset Council. We have so many boxes that we need somewhere to put them all which is accessible.
Posted by Maggie at 5:53 AM No comments: 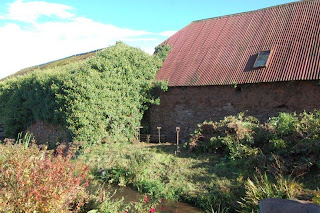 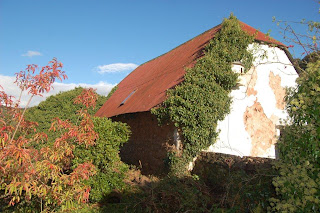 The horses moved out of the old stables in the spring to the converted barn and since then the stables have been empty. There are three stables inside the old building along with a corridor and a good size room in the roof which has some interesting old beams. We would very much like to convert the roof space into an office and just keep two of the stables with the third stable being used for the staircase access. However we need a new roof and all the ivy which is growing up the back of our buildings needs to come off before we can assess what state the cob wall is in and how much repair work is needed. We hope to clear all the ivy off the buildings this autumn.
Posted by Maggie at 3:38 AM No comments: 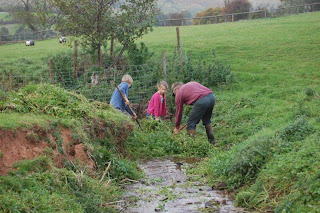 This year we have had a problem with an invasive pond weed which is taking over our stream and covering it with a horrible green mass. We have now got to the stage where you can't even see the water which makes it difficult to cross as you end up stepping in th water, as well as it being so unsightly. We think the warm weather and lack of rainf this summer has helped the plant to grow, but we have no idea where it has come from. So we thought it was about time we started to clear it out of the stream and this half term week we have had some help from our young guests Matthew and Abigail from Dorset.
Posted by Maggie at 3:31 AM No comments: 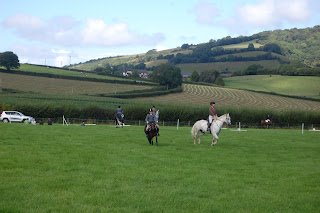 In August we ran our first horse show for the local West Somerset Riding Club, which was a dressage show with two arenas one on the grass which can be seen in the photograph and the other in our outdoor school. We were so lucky with the weather, it was absolutely glorious and everyone could sit around and watch their friends and enjoy this summer's day. We had a lot of entries and many riders who live locally supported us and rode to the competition. A big thank you to all the riders and of course without you our helpers on the day.
Posted by Maggie at 10:14 AM No comments: 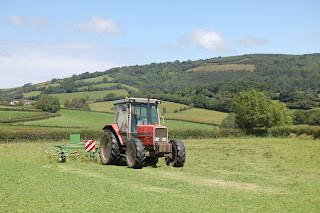 We were very lucky to start our hay making season, on would you believe it, 31st May!
This must be one of the earliest ever. Then we had to wait another month until the first week of July for good weather when we cut the grass in the field by the road to make small bale haylage. We still have two more fields to make, but the the rest of this July has been very changeable with some heavy downpours. We desperately need a dry spell so we can finish making our hay. This photo is Derek turning the grass in the field by the road on a very warm and sunny day.
Posted by Maggie at 8:49 AM No comments: 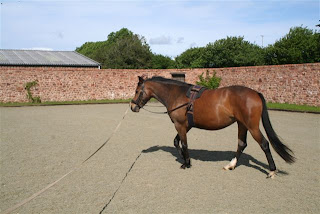 Gosh how time flies! Mim was three years old on 15th May this year, so I decided it was time she started her schooling. I started her on the lunge and initially Rob helped me by walking around the outside of the circle with her and me standing in the middle until she got the idea on what we wanted her to do. Then I carried on my own lunging her little and often so that she didn't become tired or bored. I introduced her to some poles on the ground to walk and trot over and firstly of she was good and then erupted and started being a bit naughty when she couldn't get her own way, but she soon settled down. I now intended to keep up the lunging over the summer and at some point I'll put a saddle on her back with the idea that I'll get on her in the autumn. Hopefully with all this work her muscles will become stronger and she'll lose that grass tummy!
Posted by Maggie at 2:24 AM No comments: 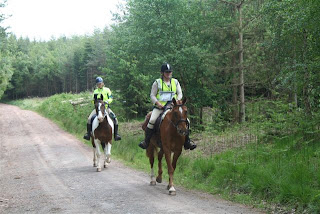 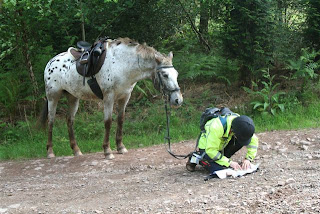 Over the weekend of 21/22 May we had a group of riders staying at the farm who had all come to train and improve their TREC skills. Most of the riders arrived on the Friday afternoon and during the evening to get their horses settled, some were stabled and others corralled. On the Saturday morning Robert worked on the theory of orienteering on horseback and just before lunch the riders went to practise their compass bearing skills on foot in some woods in the village. After lunch the riders had the chance to practise their ridden skills or PTV on a few obstacles: S-bend, rein back, corridor, gate, bending, maypole and low branches which had been set up in two of our fields. This was followed by a circuit around one of the field edges to learn the paces of their horses for a bearings section and to practise timing between the sections.

After all the horses had been settled for the night we had an evening meal and after the meal a talk and demonstration by Helen Tompkins from near Barnstaple who is a Mctimoney practitioner. We then went to the stables to practise our massaging skills on three of the horses, this went on until after 10pm before everyone disappeared off for a good nights sleep.

On the Sunday morning Rob gave maps to the riders who then drew the route for their orienteering day or POR whilst Rob gave them tips and helped with marking for timings and then when they were ready they set off in five minute intervals towards Timberscombe common and then eventually Croydon Hill. All of the riders found the route difficult to navigate in places, but at the end of the day they all said they had learnt alot from their experience.

Posted by Maggie at 7:34 AM No comments: 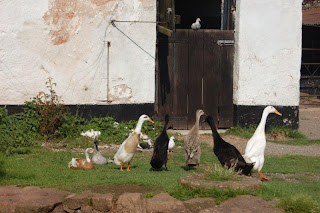 After losing our ducks and only having one female left we knew we had to find her a mate as quickly as possible. We were fortunate enough to find her a white male only 7 months old who had also suffered a trauma by losing all his family to a fox. We bought him from Jackie at BRB poultry near Wellington and then we set about trying to find some more Indian Runner ducks. Many phone call later and without much luck as most people did not have any for sale or they only had ducklings or were waiting for eggs to hatch. Then we heard that there was a poultry and waterfowl sale at Salisbury market. Even though it was a long drive there we went to the sale and had a thoroughly enjoyable and interesting day. We then came home with five more ducks who have all settled in together and enjoying life at Burrow.
Posted by Maggie at 9:59 AM 2 comments: 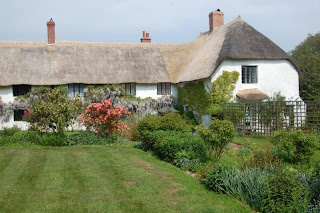 We have had very little rain since the beginning of March and everything is now beginning to look a bit desperate.
This March we fertilised and spread lime on our grass fields and here we are at the beginning of May without much grass, and I can still wander around the fields and see granules waiting to be dissolved by rain. However our guests this spring have enjoyed T-shirt weather and have finished their holidays with summer tans!
The Wisteria on the back of the house is looking particularly good this year and several of my other plants seems to be enjoying this unusal hot spring. Well at least I haven't had to do a lot of lawn mowing.
Posted by Maggie at 5:40 AM No comments:

Time has zoomed on this year and I've not updated the blog. This week has been a mixture of highs and low. Firstly we started with good news that Western Power has agreed to remove three telegraph poles and all their spaghetti electricty wires and allow us to put all the cables underground, so the view across the yard won't have a network on hanging electricity cables and it means only one telegraph pole with trees for a back drop. So work has started on digging the trenches on the drive this week. The only losers will be the swallows in the spring who won't have any cables to sit on.
Then last Thursday (I was away on a first aid course), Rob went to let the Indian Runner ducks out onto the pond for the morning but to find a massacre. Two ducks dead, three badly injured and one in shock. He suddenly heard a sound turned round and saw a mink. Imagine my sadness when I returned that evening to hear what had happened. Talking to neighbours they said there had once been a mink farm next door, but that was fourty years ago and no sign of mink since. Trust our luck that this mink had got through a small gap in the drains. We tried to nurse the three injured ducks, but their necks were so bad we had to put them down, which left one on its own. After ringing around various breeders we located one lone white drake and quickly brought him home to keep my grey duck happy.
Well we thought everything was fine with a local gamekeeper coming along and to lay some traps incase the mink returned and yes he did today. This time he came along the leet from our neighbours into the small run where the two ducks had been put for the day, but Rob and my brother saw him and quickly trapped him under the stone slabs in the yard. So he was despatched with a 410. I just really hope the local gamekeeper is right and there will only be one and we do not have any further visits.
I am off to see a man in Okehampton who says he may have some suitable Indian Runner ducks for me so my two can have some more mates.
Posted by Maggie at 9:47 AM No comments: