It was two years ago that the project to extend and re-launch the route known as the 'Coleridge Way' started. Following on from this project, and celebrating its 40th Anniversary, Exmoor National Park is now working with partners on a similar project to reinvigorate the 'Two Moors Way'. The total length of the route is 102 miles (163km) from the southern edge of Dartmoor at Ivybridge to the coast at Lynmouth and this continues to be one of the most popular long distant trails in the South West after the Coast Path.


The project involves trail management works to enhance the route and improve signage alongside the development of a new website and promotional leaflet, which is being developed by the re-formed Two Moors Way Association. Initial funding has been secured from Dartmoor and Exmoor National Park Authorities, alongside a donation from the Two Moors Way Association, and initial work is being completed throughout the spring on 2016 prior to the anniversary celebrations in early June. See http://www.bbc.co.uk/devon/outdoors/walks/two_moors_way.shtml
Posted by Maggie at 3:46 AM No comments: 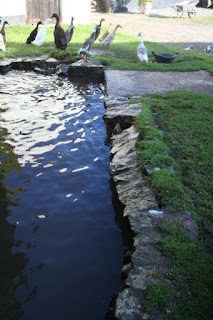 The side of the duck pond has collapsed and is in need of serious repair. This happened at the beginning of the year which is not a good time to stand in cold water and move large stones, so Rob has put some temporary stones underneath to stop the whole side collapsing and when the weather is warmer in the spring it will be repaired. We will probably increase the width of the pond to make it more of a feature in the yard.
Posted by Maggie at 8:20 AM No comments: