You might be interested to know that along with our house being Grade II listed, so is the post box which is in the wall attached to house. The wall is also listed. This autumn a few of the corner stones had fallen out and the pointing was starting to crumble, so I gave the wall a quick make over and pointed up the stones. 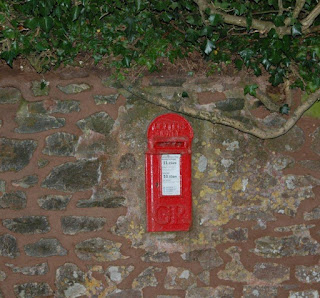 Exciting news for anyone who loves steam engines. The West Somerset Railway along with two other heritage lines, The Bluebell Railway and Keighley and Worth Valley has announced it will be hosting the world's most famous steam locomotive LNER 4-6-2 no 60103 Flying Scotsman  at the beginning of September 2017. After weeks of judging, the heritage railways selected were informed on Friday 18 November after a selection process undertaken by the National Railway Museum in partnership with Riley & Son (E) Ltd.
Paul Conibeare, General Manager at West Somerset Railway, said: "We're proud to have been selected as one of only three heritage railways to host Flying Scotsman in 2017 and are looking forward to promoting a successful and safe event".
Tickets will be for sale from the middle of February, so if you are planning a holiday in September 2017, look at the WSR website for further details.

Posted by Maggie at 2:25 PM No comments:

This year we bought two Golden Gurnsey goats from Penfold goats in Devon and we have called then Rodney and Sidney. They are so friendly that they follow you around like a dog and even wag their tails! I have been finding it hard to take a photograph of them because everytime I turn up with a camera they come bounding over to see me. However the other goats aren't too keen on these youngsters, so it is taking some time to get them settled and to learn to avoid Bessie who has head butted them a few times, which is not good as she has horns. 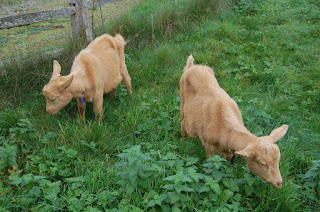