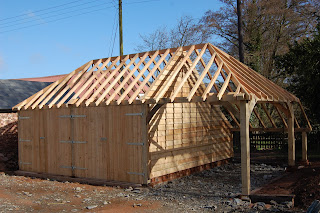 The garage is almost complete, just needs its roof!
Posted by Maggie at 1:30 PM 1 comment: 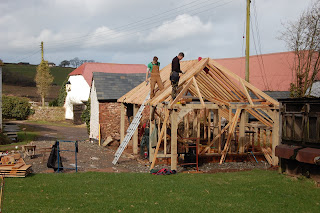 This March the new garage was built behind the old dog kennel. It has been built by Charley Brentnall and his team from Wiltshire. Charley worked on the restoration of Shackelton's hut at the Antartic and was also involved in the restoration of Windsor Castle after its fire. The oak for the beams has been sourced from the Badminton Estate and the Larch and Douglas fir has come from the Winchcombe Estate in Gloucestershire. The roof on garage will have old slates to match the other buildings. We have also come to an agreement with the Electricty company for all the telegraphs poles to be removed and the electricity to go underground, so we don't have to look at all the ugly poles and wires draped across the courtyard. Charley will be returning later in the year to take measurements in the medieval barn which has to have new oak roof trusses to replace the steel RSJs which were put in after its fire and is part of an agreement we have with the Exmoor National Park for its restoration.
Posted by Maggie at 12:56 PM No comments: