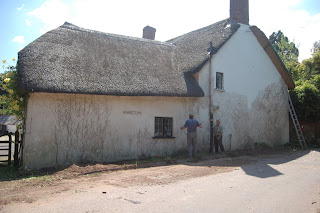 The end wall of Burrow Farm House has been covered in Ivy, even climbing on to the roof and over the thatch, so we took the decision to take out all the shrubs growing along the wall of the house so that we could get to the Ivy. This weekend we stripped the walls ready for painting and in the autumn we will restore the grass verge and plant some new bushes beside the house as well as some spring bulbs. At least our guests should be able to find us now, even in the dark as the wall is so bright and they will no longer be fighting with a bush as the open the gate!
Posted by Maggie at 3:23 AM No comments: 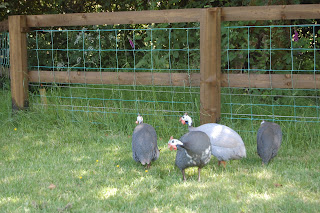 Whilst at Moonridge Farm in Crediton I bought four guinea fowl. Two hens and two cock birds. One male is a Lavender colour whilst the others are called Pearl. We kept them in the old chicken house for several weeks until they were settled before we allowed them free to wander. They are supposed to roost in the trees at night, but so far they prefer to go back into the chicken house when I feed them in the evening. They make very good guard 'dogs' as they make a terrible noise if anything disturbs them, so I hope if a fox does snoop around they will alert me.
Posted by Maggie at 3:16 AM No comments: 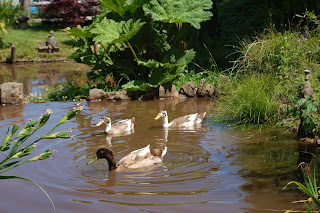 Earlier in the year I lost two Indian Runner ducks to a fox, so this spring we have put up some electric fencing along the edge of the garden fence to hopefully stop any foxes preying on the ducks. I have bought two brown and white ducks from http://www.moonridgefar.co.uk/ near Crediton, Exeter who breed waterfowl and poultry.
At the moment the two young ducks and one of my drakes are residing in my brothers garden until they know each other well and I can move them to the garden with the other Indian Runner ducks and drake.
Posted by Maggie at 3:07 AM No comments: